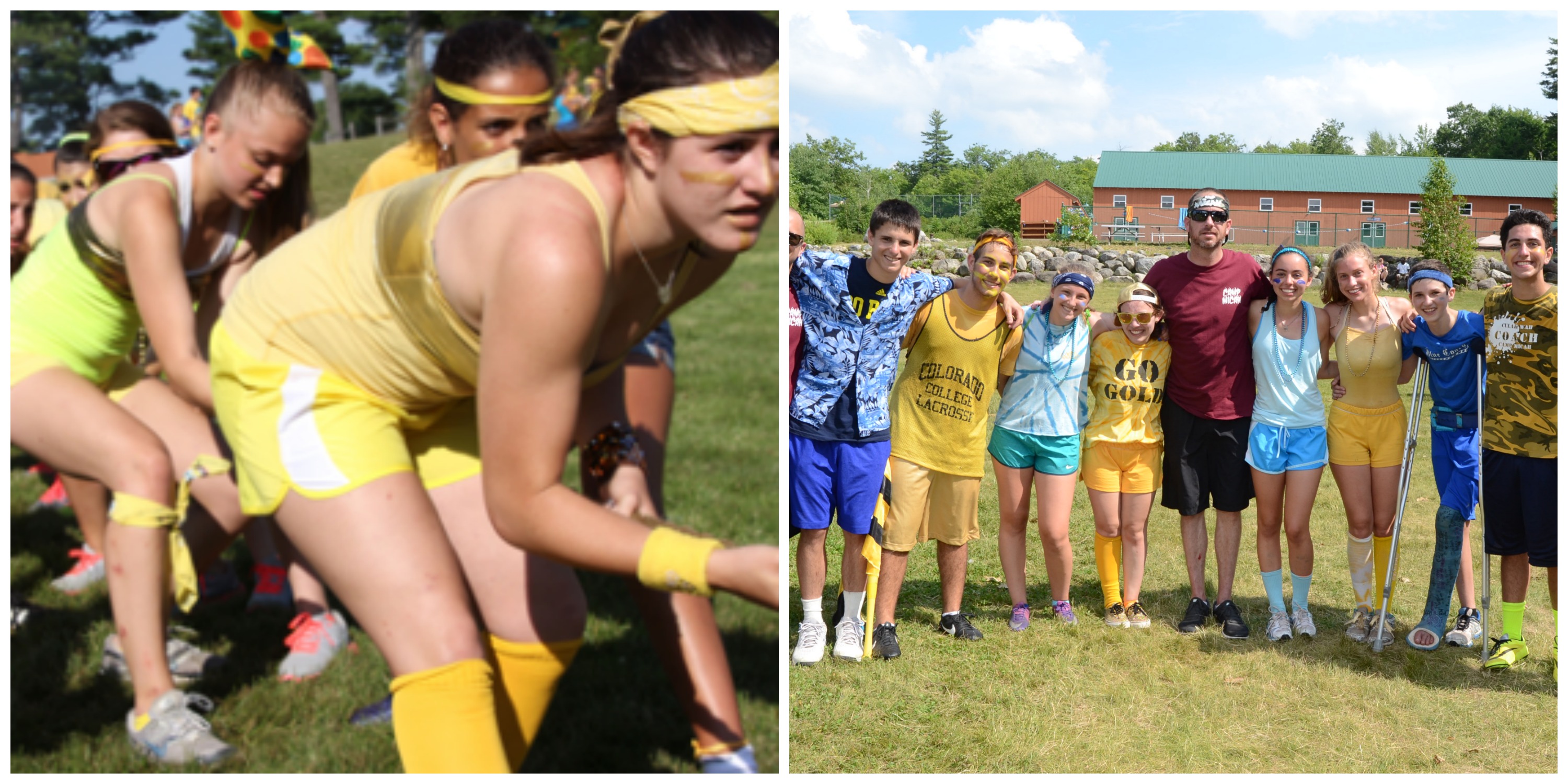 An interview with Mark Lipof, the Director of Camp Micah in Bridgton, Maine,  a Maine Camp Experience Camp.

I think Color War is one of those sacred camp moments. Every kid in the camp community is singing together, cheering together. At our camp, the kids all dress in their gold or their blue all together. At our camp you’re on that team for the rest of your life. Anyone who’s related to you at camp is also on that team. It creates a connection, a tradition. Younger siblings can’t wait to get to camp because they already know what team they’re on. Color War, for example, binds you. We learned this idea from camps that are 100 years old, where the grandfather was on the same team as the grandson. There’s a legacy and a commitment, not only to the camp but also to your teammates.

We used to do a one-day Olympics; but we decided at our camp to just focus on Color War. Also, at our camp, I thought it was really important for kids who always come to camp one session to be on a Color War team, because if they aren’t there’s one big part of camp that they aren’t connected to. It was important that 20 years after they were a camper that when they came back for a reunion Blue versus Gold softball game, they knew what team they were on. So we went back to two Color Wars. We do a 1.5 day in the first month and at the end of the day there are points that the teams receive and that goes up in the dining hall. Then once it breaks for the three-day part in the second month, the point-spread starts at what it was at the end of the first month. It’s a cool thing.

Why do you think Color War is so exciting for kids?

The Camp schedule can become similar day-to-day; which has great value for kids building on familiarity. You go to sleep at the same time; you have all your meals at the same time. I think Color War changes the tenor of camp and marks a very special time.

Leading up to and during our first summer, a group of environmentalists were upset with camp being built and wanted to have me arrested because they said I broke environmental laws. Everybody knew I was upset.

Then, about three days later, police came and staged an arrest of me in the dining hall. They handcuffed me and I said, “I didn’t break anything!” They said, “Yes you did!” I said, What’d I break?” They said, “You broke Color War.” At any other given day it would have been a huge surpass, but three quarters of the kids at camp didn’t know what Color War was. Then we explained it and everyone got excited and we told them what team they were on. I think the break is important in jarring a camp that’s usually so well-organized and controlled. It’s been going on forever, and I don’t remember a camp that hasn’t been doing it in some form.

Is the concept of captains a big part of Color War?

Yes. Different camps do it differently. In most traditional settings, there is a Color War period, in which the teams elect the captains. We decided to have captains in each age group with the oldest captains being the head of the team. The counselors vote for two girls and two guys and the highest votes become the Color War coaches and no one knows who they are until Color War breaks. So the counselors are there to help the captains coordinate. At our camp we have a captain and a co-captain for the oldest kids and then there’s a girl and a guy captain for each other unit.

The leadership qualities displayed are really incredible. Your first job as captain is to make everybody feel like they have a part because some campers lost out on being captain. It’s neat to see them think about that and then make sure everyone is involved. Of course, it’s a double-edged sword. Some camps feel that captains lead to exclusion. But I like it because I want kids to learn that what makes you special is what you do and how you act. It’s not a popularity contest at our camp, which it can be at some places. And, at the end of the competition, the Head of Color war is given two team shirts and he or she gives those shirts to a boy and a girl who weren’t captains, but who were the best in Color War. That’s almost a better honor than becoming captain, because they are recognized for having a big influence on the team. So there’s a lot of ways in Color War to elevate different kids.

What happened when there was a Color War tie a few years ago?

When we started Color War I wanted there to be clear rules. At our camp, if points are within a statistical spread, and it’s close enough, then it’s a tie. If it’s a tie, then the Maroon Team, which is our counselor team, wins. That’s the only way they can win. So when we figured out it was a tie, we were amazed. For 12 years we never had a tie and we didn’t think it was going to happen, it’s so statistically tough. Once it occurred, there were people on the committee who said, “It has to be one team or the other. We have to do something.” I said, “No. We don’t have to do anything. If it’s a tie, it’s a tie.” Immediately after the announcement, we started to see different impressions of how kids were taking it. This was so interesting. One was, “Good, we didn’t lose.” Second was, “There has to be a winner or a loser. We have to change this.” It’s a great learning experience for everyone. Sometimes you have to follow through with things that you didn’t think would occur.

Many campers and staff thought that the banner should be green, which is blue and gold together. But we decided in the beginning that the counselor’s color was maroon, so that would be the color of the banner. Then the next summer we began by cutting the maroon banner in half. Partly it was symbolic. But also we accidentally spelled one of the kid’s names wrong, so we were ordering another one anyway. When we cut it, though, I got goose-bumps. It was a ceremony that was so a part of the fabric and culture of our camp.

Color War is pretty epic. Is there also a special event at the end of camp?

Yes! I think it’s really important to have a closing ceremony. At the first camp I was at you wrote your dreams and wishes on a piece of paper and floated it out with a candle on the lake. It wasn’t the most ecological thing, but it marked the end of the summer. At Micah, we have a banquet, and after, everyone lines up in the dark at the flagpoles and I light one candle and then the administration lights their candles from my candle. And then I say, “We all came here as individuals, but at the end of the summer, one light becomes 400 lights.” And they all light their candles and put them on the rocks on either side of the chapel. Then the oldest kids say goodbye and sing a song and give a speech to the camp. It’s quick but meaningful. They get to mark the end of their experience and pass on the importance of that experience to the younger kids. We have to remember the special moments in life or life becomes just living.