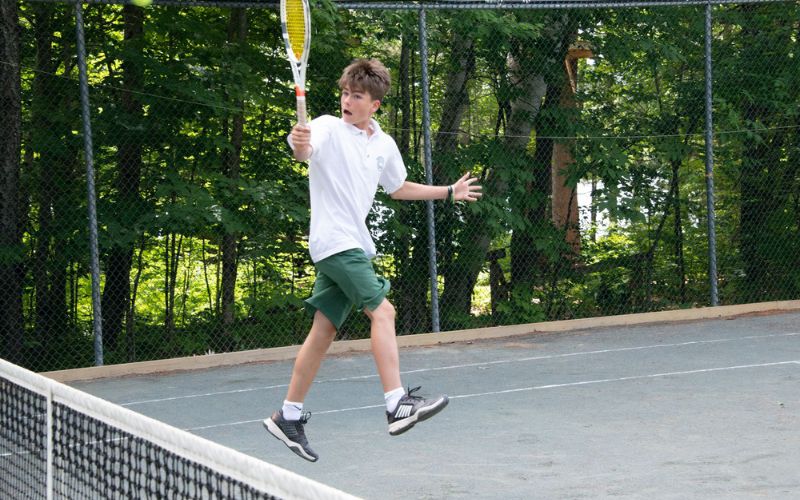 With the US Open just wrapped up, let’s talk tennis!  Here’s a quick recap of what happened in Flushing, NY in case you missed it: Iga Świątek from Poland won the women’s title; Carlos Alcatraz from Spain won the men’s. Serena Williams is done (the GOAT!) – she won her first two matches before falling to Ajla Tomljanovic. Frances Tiafoe, who was cheered on by Michelle Obama, became the first American man to reach the US Open semifinals since Roddick in 2006 and the first African American man to reach the US Open semifinals since Arthur Ashe in 1972. Rafael Nadal, who inspired many, gave himself a bloody nose, and when Nick Kyrgios lost in the quarterfinals, he threw and smashed a couple of racquets. For all of the fans, it was certainly an interesting few weeks of tennis. While camp tennis may not be as dramatic as this year’s Open was, it doesn’t mean it’s any less exciting for our campers. Obviously, we hope they don’t destroy racquets or get hurt, but instead aspire to the greatness of Serena (or somewhere in that direction).

The tennis courts at Maine Camps are usually quite busy. Some campers play every day or every other day as part of their program schedule, and for others it is an elective activity. As is often the case with other activities like swim, tennis may be mandatory for the younger campers but not for the older ones. Some kids may try tennis at camp for the first time. A regularly scheduled tennis activity block presents a low-stress, relaxing exposure to the game for our newbies. Some may love it and crave more tennis to play, and they will be able to do so at camp and when they return home. While others may feel that may not be the sport for them, at least they’ve given it a try and will have learned the basics of the game: how to hold the racquet, hit a ball, serve, and the general rules. For advanced players, the sport can be physically demanding, requiring footwork, dexterity and endurance. Tennis excellence also results from thoughtful strategy and mental perseverance, skills that are useful both on and off a tennis court. Many Maine Camps also offer pickleball as part of their tennis program.

Playing tennis at camp is interesting compared to some other sports for the reason that it is both individual, group and team oriented. Individual excellence in singles is rewarded with trophies, personal satisfaction with ascending to the top of the tennis “ladder” and the excitement of winning matches. Being part of a doubles team can reap the same rewards, but the accolades are shared with a partner. Many camps participate in intercamp tennis games or larger invitational tennis tournaments and on those days, how campers perform as a team comes into play as well.  Whether at their own camp or away at another, we hope that our campers always exhibit good sportsmanship and have a whole lot of fun while playing. Bringing individual and/or team trophies back to camp at the end of the day just adds to the excitement and success of those days. As is the case with other camp activities, tennis is usually also a part of whatever Color War or Olympic-type competition that your child’s camp offers during or at the conclusion of the camp season.

For those campers who play tennis during the year at home, tennis at camp is an excellent way to hone and build upon their existing tennis skills. Clinics, drills and mandatory or elective activity blocks are a great way to practice, but private lessons are a perfect opportunity for tennis campers to take their game to the next level. If tennis is your camper’s favorite sport, then add on the private lessons and your child can play with even more instruction for hours each day. If your camper plays on a USTA, club or school team at home, they likely can’t or won’t want to take a summer break from tennis, and they don’t need to. Maine camps offer everything they need for the continuity required for those playing at the competitive level. Concentrating on tennis at camp may even result in your camper making a team at home for the very first time!  It’s a great idea to talk to your tennis camper and your camp’s tennis director before camp begins about creating the best and most appropriate tennis experience for your child. However, if you get a letter from your camper during the summer asking for more tennis, it’s never too late, and campers should be able to increase their tennis activity level at that point.

So if you are a tennis enthusiast, we hope you enjoyed watching or attending the Open this year, and if your kids play tennis at home, we hope they have a great season. Who knows … perhaps we’ll watch them play in Flushing one day, and we’ll say “it all started at camp in Maine …”