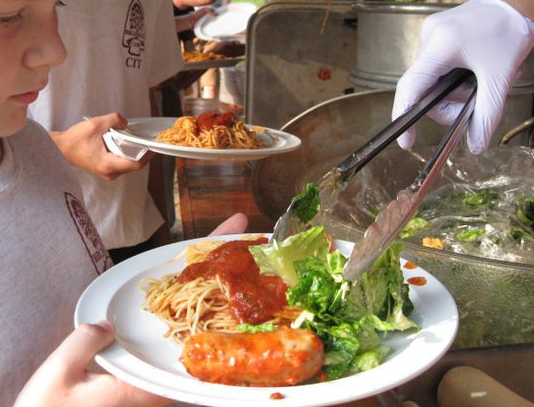 So it seemed to me, a nine year-old New Yorker with the gastronomical range of a goldfish. The word ‘goldfish’ here is particularly appropriate, says my mother, because at that age, the only food I would predictably eat was fish sticks. And yet I had decided, of my own volition, to attend sleep away camp. Mom is still surprised.

Let’s pause here and go over what the first year camper version of me refused to eat:

3. Anything resembling a leaf

5. Food that had touched other food on my plate

Suffice to say, I was a tough cookie. Strangely, my mother neglected to mention these dietary preferences to the kitchen prior to my arrival at Birch Rock Camp. Let me tell you, that first week was HARD. Not only did I face foodstuffs I despised, I was supposed to eat them surrounded by my friends and peers! Finally, pride outweighed pickiness and I ate some fruit. Then I drank the ‘bug juice’. I even asked for seconds on Cream of Wheat.

Truthfully, I found I didn’t dislike any of it, even the grits, and the respect and admiration of my fellow campers meant more to me than maintaining my rigorous cuisine criteria. So I worked hard to be the guy who ate his share of the salad, even if it entailed consuming the occasional raw tomato.

And look at me now, a college senior! I dig spinach, I make myself oatmeal, and I savored cow lung while studying in Germany. But I still hate raw tomato! Some things about us never change, I guess. And only at camp have I ever eaten succotash.

P.S. Camp food has definitely elevated its status to cuisine at several Maine Camp Experience camps that are leading the way in culinary skill development and farm-to-table movements/meals at camps; read more here