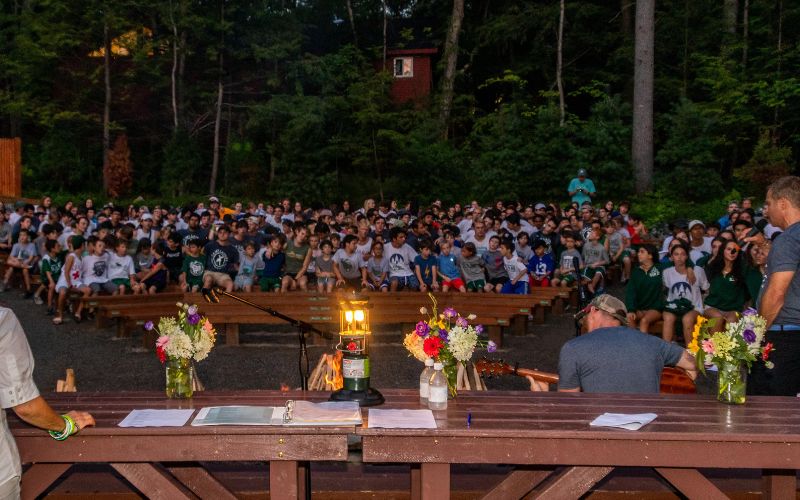 Summer is winding down, and the end of camp is in sight. Within the week, cars, buses and planes will depart from Maine to return campers to their permanent homes, both near and far. But for another few days, many Maine campers are still in their “summer homes away from home,” and there are a multitude of end-of-camp traditions that will take place before our campers depart “Vacationland.”  There are so many different rituals that accompany the last few days at camp, all intended to impart a sense of accomplishment, significance, and closure to the end of the camping session or season.

Awards, often accompanied by special ceremonies, are common at this point in the summer. Some awards are given for being a special type of camper: one who exudes kindness, friendliness, or is neater than the average camper.  Perhaps awards are given for whatever values a particular camp espouses, and campers might receive feathers, plaques, badges, certificates, or other mementos to commemorate the receipt of such an award. Bunk awards are fun to receive too. Sports and activities awards are common, of course: the best tennis or baseball player or the best swimmer per division might receive an award, and an older camper could be recognized as the best of the entire camp. Gymnastic awards, dance awards, arts and crafts awards, there are awards for all activities. In some cases, campers set goals at the beginning of the camping season and are awarded for having achieved their own individual goals by summer’s end.

Burn, baby, burn! Fire plays a big role as camp is ending. Campers float candles on the beautiful Maine lakes; camps burn the “year,” sometimes afloat on the lakes, so your children can watch the numbers 2-0-2-2 go up in flames from afar; rope burning takes place and often there are ceremonies in which torches get passed to signify passage of time, or elevation of campers to senior roles. One Maine camp holds a candlelight service on the last night of camp, when campers sing songs from lantern-lit canoes on the lake. And campfires. Always there are campfires, because it’s camp!

Not surprisingly, food comes into play also. Banquets are held at many camps, with special foods and often a theme. Kids dress up in their “nice” clothes, or wear camp colors, and sometimes the older campers are an integral, if not the sole source, of the planning of the event. The whole camp may even dine together, in a way different from other nights. One camp enjoys a “Flour Cake” tradition, which involves trying to cut a cake in a certain way. Another has “Cake and Tears” the last night which is, well, pretty self-explanatory.

Other fun-filled traditions include special trips, carnivals, circus shows, athletic or other competitions, artistic performances or exhibitions, and in some cases, parents may attend. The more poignant traditions tug at the heartstrings of campers, staff and owners. Kids start to pack, they pen bus or plane letters to each other to read once they are on their way back to their “real” homes; at one camp kids “pass down” pieces of flannel or spirit gear to younger siblings and campers. At another, campers sign a board and pass that down to others. Slide shows are a fun and sentimental way to recap the events of the summer, and traditional camp songs are sung.

With most of the bedding packed up into trunks, many campers will sleep in their sleeping bags on the last night. Campers may even put all their mattresses on the floor pushed in the middle to be as close together as possible to stay up late, laugh, tell stories, reminisce, and enjoy their last hours together.

Tears are traditional also, starting with each end-of-camp ritual. Some campers won’t cry until the last night, and even continue into the final day. For others, the tears start when they see their parents again, or after they arrive home, and for a few, there will be no tears at all. All of the tears, however, are something to be celebrated. After all, tears mean a good time was had. Tears mean there are friends and fun to be missed. Tears mean that as much as campers love to go home, camp is their second home, or their home away from home. Some campers have their very best friends at summer camp, and they will count the days until they return to Maine in ten months, to live together again.