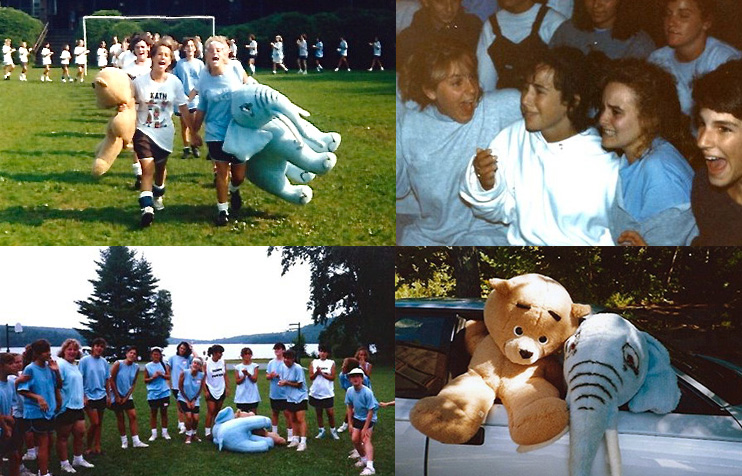 It’s often difficult for me to remember what I did yesterday, or five minutes ago for that matter.  Oddly enough, when it comes to remembering my experiences as a camper in Harrison, Maine that spanned over a seven summer period starting at the young age of eight, nothing could be more clear.  Crystal clear actually.  Crystal was the name of the lake.  The bottom of the lake wasn’t always that clear but the memories I had on Crystal Lake still are.

So what is it about summer camp that keeps those magical memories from almost thirty years ago alive?  There’s much that goes into the delicious recipe that is camp, though none of the ingredients are so complicated.  In fact, when you break it down one by one, it’s really quite simple.

Almost instantly, I knew I was among a Sisterhood.  There was an immediate sense of unity between all the campers that felt organic and unforced.  The comfort of knowing that these girls, regardless of age, had each other’s back and now mine too made all the difference.  Never was there a shortage of warm smiles, tight embraces or helping hands.  The extraordinary spirit and enthusiasm that filled the air was contagious.  I couldn’t help but want to breathe it in deeply.  Being welcomed whole heartedly into this sacred place was an amazing and powerful feeling.

If I close my eyes and focus I can smell camp and its surroundings.  The pine trees.  The grass.  The wood bunks.  The campfires.  The Maine air.  The rain.  I can smell all of it and when I do, it makes me smile.  I can also smell the wet, mildewy towels that used to hang over the rafters in the bunks and the garbage that would pile up outside the backdoor of the kitchen after a meal waiting to be driven up to the Dump.  Those smells are just as pungent in my nose, yet ironically they too make me smile.   It’s all part of the magic.

Camp food may not have been something to write home about, but I certainly do remember a lot of those meals.  We ate a dinner type of meal at lunch time and a lighter kind of meal for dinner.  We drank milk out of those metal machines and rarely got through a food service without someone spilling due to an overflowing cup on their way back to the table.  White bread and peanut butter and jelly were always optional if a camper didn’t want to eat the beef stew served over egg noodles.  The high of the week was Sunday morning breakfast when we inhaled the scrambled eggs and the homemade sticky buns.  The aroma that swept through the entire bunk line was the only wake-up call I needed.  As far as I was concerned, the sweet smell of cinnamon and honey was my personal Reveille.

Activities at camp ranged from soccer and softball and volleyball and tennis and archery to swimming, small craft on the water and everybody’s favorite, waterskiing.  When ski showed up on the schedule, I recall racing down the big hill all the way from my bunk to be one of the first girls at the dock!  After my ski run on the glassy, morning calm of the lake, I sometimes got to help out in the boat while my friends took their turn next.  There was no limit on arts and crafts either at camp.  I batiked my little heart out for seven summers, loomed my way through countless pot holders, made ceramics that my Mother still has to this day and even learned how to solder together hot pieces of metal to make jewelry in the Silver Shop.  I went on nature hikes and overnight camping trips.  I learned about wild animals.  I participated in talent shows and memorized more camp songs than I’d ever imagined possible.

I bet I could write an entire memoir solely on camp songs.  That’s how important it was.  We’d sing songs at assembly every morning and every evening.  We’d sing various renditions of Grace before each meal.  We’d sing in our bunks and skipping down the Pine path.  We practically sang songs in our sleep.

Color war lasted the entire summer.  The beloved Blue Ellies and the Brown Teddies were our team mascots.  Cheering at land sports games and swim meets was everything.  I’d bend over with my hands between my knees and scream my lungs off showing my team spirit.  The lyrics to almost every cheer for both The Blue and The Brown are permanently engrained in my brain.

“When The Brown & Blue Go Marching & The Banners Wave On High….”

“The Brown Is For Courage & The Blue Is For Beauty……”

“At Once We Shout Without A Doubt, Three Cheers Hip, Hip, Hooray.  Along The Lakes, Among The Trees & In Our Hearts For Aye….”

The summer of 1987 would be my last year.  That final summer marked an opportunity to be eligible for nomination as Team Captain.  If nominated, I would be able to run for election.  There was nothing I wanted more than to be elected by the entire camp population as one of the two Color War Captains.  I had dreamt of this honor since 1981.

It was wet and damp on the evening of the big camp vote.  I, along with the other handful of nominees had to wait outside in the rain while the camper(s) who had suggested candidates for Captain spoke out on our behalf as to our leadership skills, team spirit and overall merit for the position at hand.  It felt as if hours had passed, but it was probably more like minutes before we were welcomed back into the Rec Hall.  My heart pounded out of my chest as I waited anxiously to hear the camp director make the official announcement.

I will never, ever, ever forget the moment when I heard her call my name.  The screaming excitement, tears of joy and the reverberating energy that carried through the entire room was like nothing I’ve experienced.  To this day, it is one of the greatest memories of my entire life.  Pure magic.

Each summer there was an event called Captain’s Night.  The whole camp would gather at the lake for the final campfire of the season.  Of course we would sing songs while crying because the summer was drawing to an end.  Per tradition, every camper was given a piece of birch bark.  On this bark we would write a wish before placing it into the fire to burn.  Then, each camper would light a candle that was atop a floatable piece of wood and set it in the water where it would then drift out onto the lake.  The image of over two hundred candles glistening on Crystal Lake under the evening moonlight is second to none.   If that isn’t a magical memory, I don’t know what is.

After seven spectacular summers, all my camp wishes had come true.  I now had one final birch bark wish since this would be my last Captain’s Night campfire.  What I wrote on the birch bark was the hope that my memories of camp would always stay fresh in my mind and the friendships I had formed over the years would remain strong.  Camp had become a safe place where I was accepted for exactly who I was.  It was my magical home away from home.  The thought of having that taken away was almost too much to bare.

Practically three decades later, as the rest of the world gets bigger and more complicated, somehow camp manages to remain magically simplistic.  It’s almost impossible to put into words what it means to know that this generation of campers is still being exposed to the same morals and values and life lessons that I was taught as a young girl.

I’m proud of the woman I’ve become and I attribute much of who I am to what I learned at camp.  Though this may be a personal reflection of my own journey, I know the essence of camp is truly a universal feeling that’s shared among the amazing young women with whom I had the privilege of experiencing my summers in Maine.  If you believe in magic, then you believe in camp.  And vice versa.