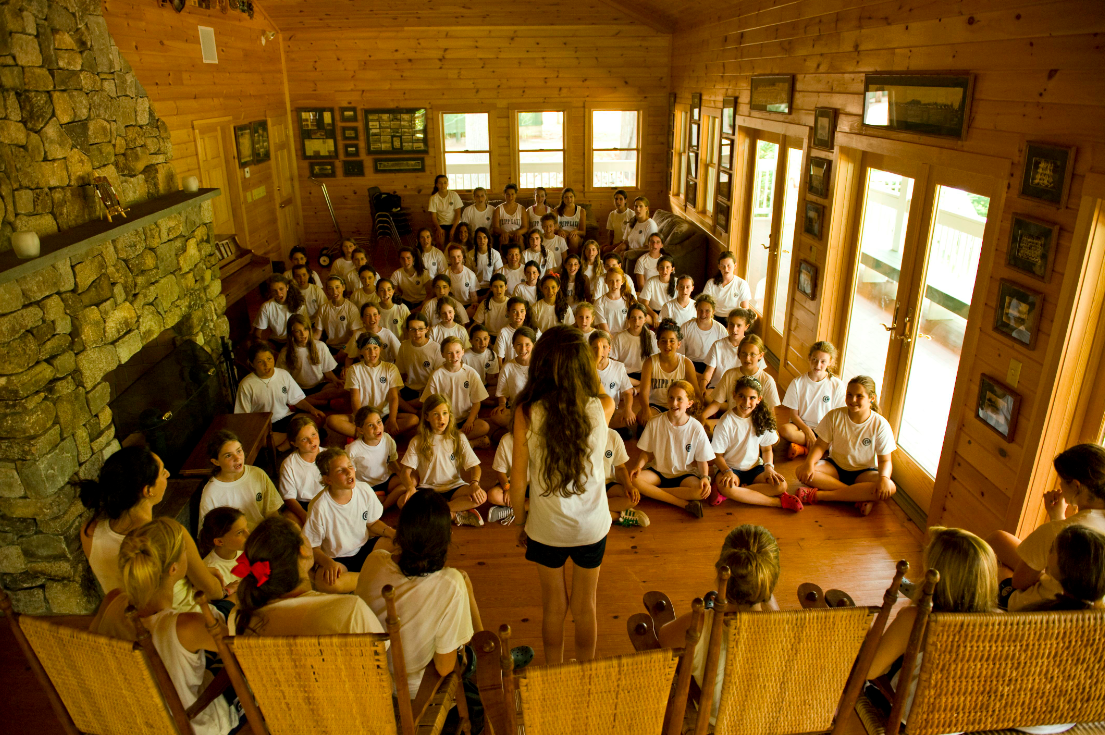 An honest look at how hard, and rewarding, it can be to challenge yourself at summer camp, by our guest blogger, Hannah Pasternak

One purpose of camp is to learn how to reach out—how to broaden your horizons, diversify your friend-spectrum, and unfurl your mind. Where I attended camp, this was heavily enforced. As a lower division camper (ages 12 and under), we had only a few choice and elective opportunities in terms of our schedule. At “team games,” everyone participated in every sport whether you were good enough to one day be a gold medal Olympian or had never picked up a lacrosse stick or hit a field hockey ball in your life. I, of course, was the latter type of camper. I was always rather uncoordinated and liked to shelter myself doing Arts & Crafts or Enameling—in other words, indoor activities. Simple measures by the camps’ directors and administrators like these truly push campers out of their comfort zones and into new worlds where eyes are opened and campers like me can say, “Hey, I’m not as uncoordinated as I thought I was!” Over time, campers begin to realize that everything happens for a reason. Camp leaders make decisions like these—for example, to make certain activities mandatory—because they are in our best interest. And that is why we love camp.

It is difficult as a young camper, however, to understand these decisions and how beneficial they truly are. In retrospect, I can guarantee that 99.99% of campers will look back and realize how meaningful this encouragement was. I was one of those campers myself. As I mentioned previously, I wasn’t the most athletic girl at a camp where it seemed all of my friends were on at least 3 competitive sports teams at home. When I started camp, I also happened to be not the most social camper, and not the kindest camper, either. The combination of these traits made it difficult for me at first. I was somewhat randomly placed into a bunk my first summer at camp, as most first-year campers are. After a camper’s first summer, my camp sends her bunkmate request forms every spring. Here, she can list 10 girls she would enjoy spending her summer with in close quarters.

Over the summers that followed, the other bunks in my age group evolved to fit the eternal bonds that girls were starting to build, most likely because of good chemistry between girls and mutual desires shown through these request forms. However, the original bunk I was put in from my first summer seemed to almost never vary for the exception of an additional girl added onto our “core group” my second summer. With each year that passed, my attitude at camp got progressively worse. I still didn’t feel like I had that one “BFF” while it seemed everyone else in my age group did. For four summers, my bunk never changed as I made no effort to change it.

My fifth summer, I was 13. I got on the bus to camp like it was routine, kissed my parents goodbye, and expected this summer to be no different than any other. However, I found out later on the bus ride that I was placed in a bunk with girls I had never even socialized with. Meanwhile, my old bunk was placed together. I was shocked. I didn’t outwardly request to be switched, so I didn’t understand why I was. But today, I do. Not only do I understand, but I am grateful. That summer, I transformed. Once, I had five friends in my age group. By the end of that summer, I was able to walk into any bunk with a warm welcome or tell any girl in my age group my deepest and darkest secrets. Creatively, I was rejuvenated. As a 13-year-old camper, I wrote about ten full songs that summer, all of which I comfortably played with my guitar in front of my new best friends and anyone else who wanted to listen. I tried painting for the first time, and I fell in love with it.

Fast forward two summers. I had a whole new set of best friends, but in addition to that, became equally close with every other girl in my age group—literally. I felt like I belonged. I went to bed smiling every night. I won the Fine Arts Award on my last night of camp. The same night, I won the Dedication Cup—a special award given to a second-year senior (a camper from the oldest age group) in honor of her dedication to and compassion for camp.

In hindsight, it is amazing to think that none of this would have happened if it were not for the camp director, and her decision to move my bunk. If my situation that summer remained the same as it had always been, I might not have even wanted to come back to camp for my last few summers. They always say, “Mother knows best.” Well, Mother is not the only one that knows best. When it comes to a lot of things, your camp directors, counselors, owners, and other administrators do too.

Now that bunk-selection season is on the rise, it is important to work together with camp directors to settle on what might not be the easiest adjustment or situation, but what will, at the end of the day, create the best camp experience possible.

Hannah comes from a generations-old family tradition of camping in Maine, and is herself an alum of Maine Camp Experience member camp Tripp Lake. Hannah graduates from high school this summer, and will be attending Brown University in the fall.