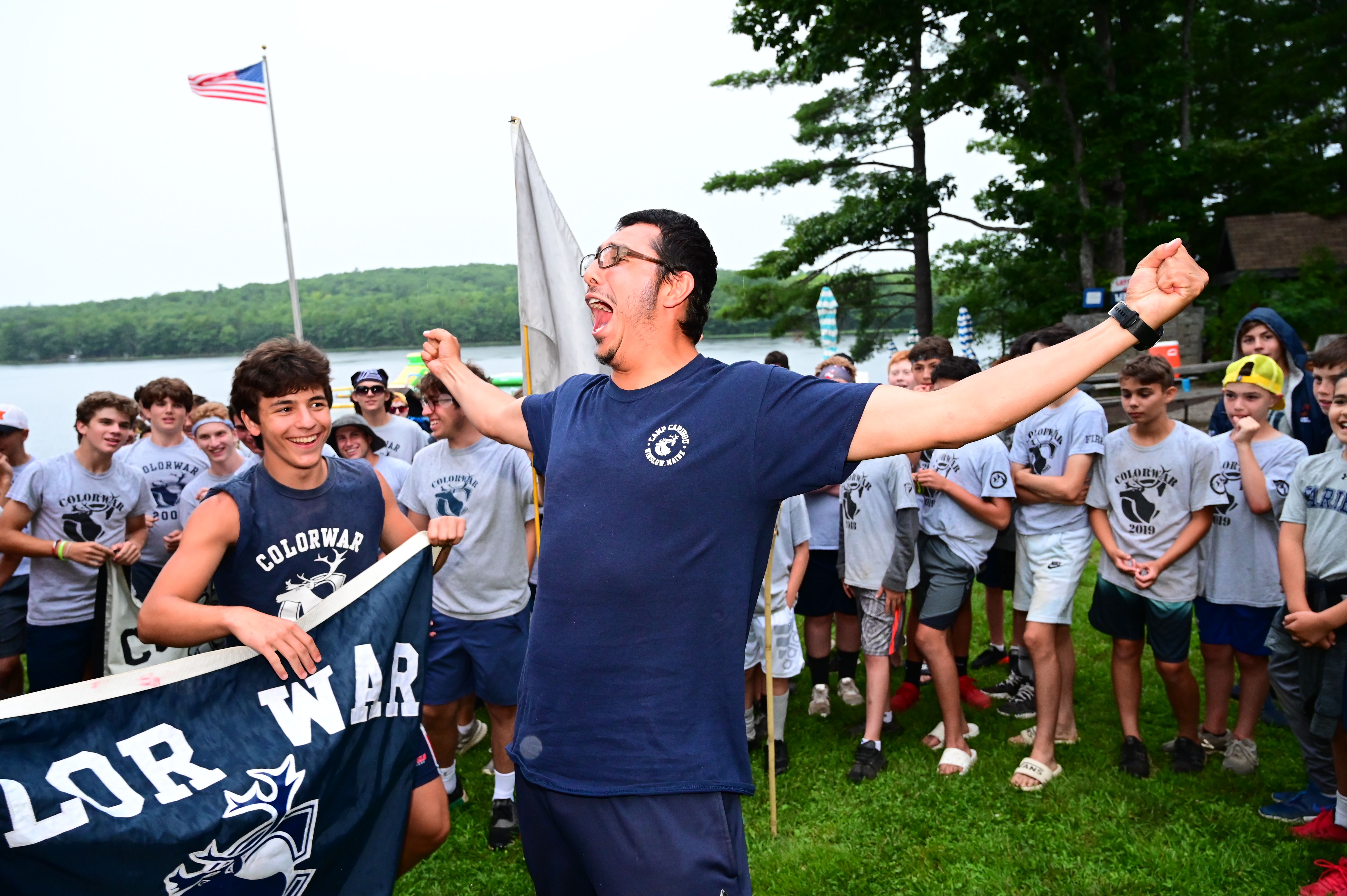 Game on! As we head into the last couple weeks of camp, many Maine Camps are gearing up for end-of-the-summer, all-camp competition events. Some have been ongoing since campers first arrived with a big culmination at the end, and others have a few special days reserved specifically for the end of camp. Each camp has their own traditions, as important and memorable as the camp itself, woven into the fabric of each summer. Whether it’s called Olympics, Color War, Jamboree, The Cup, or College Days, campers eagerly await these days of rivalry. Teams compete to win categories and points all toward the ultimate goal of being the victors when it all ends.

The onset of competition is often a mystery itself: when will it be begin? How will it be announced? Will there be “fake breaks” staged by either older campers or staff, meant to mimic true breaks and fool the campers into thinking competition has begun, when it actually has not? Campers start looking for clues around this time, and the excitement begins to build.

In many cases, once the competitions have begun, amidst much spirited screaming and elation, campers are divided into two or three teams. Bunk groups are split, and often colors, characters, sports teams or universities are associated with each team. The spirit is palpable! Now, for days, campers will dress in their assigned colors, perhaps with accompanying costumes replete with tutus, face paint, bandanas, or jerseys. Campers might eat some meals with team members of their own or different ages. Older campers or counselors often have coveted leadership roles during this time: some campers have yearned for years to be chosen to fill these spots. Once the teams have been set and the leaders announced, let the games begin!

Games, and more games, take place for the next few days. Swim meets in the gorgeous Maine lakes, track meets, relay races and more fill the days; special tennis, basketball, soccer and dance competitions take place some days and nights. All-star teams might be chosen. Some of these activities are attended by the entire camp, all cheering as one, while attendance at others may be a special privilege reserved for the oldest campers. More unusual “sports” come into play like: watermelon eating competitions, bucket brigades, tug of war, egg tosses, Fruit Loops color sorting, and potato sack races.

Not a sports fan? Not a problem! So many other aspects require attention too. Social halls and dining rooms need backdrops to be decorated in accordance with team colors or themes, and campers with painting, drawing, and all-around artistic abilities are needed here. T-shirts may be designed and silk-screened by the older campers. Plaques get carved and painted to live at camp in perpetuity. As the years go on, campers, counselors and alumni visit and look back fondly upon these remembrances of past competitions.

Camps usually end these days (or weeks) of competition with unique traditions. One camp takes everyone on a trip to Old Orchard Beach. Others have had campers and counselors writing special songs for days and teaching them to the entire team. The finale at those camps may be “Sing,” and if a song is good enough, it becomes a part of camp tradition, with campers singing it for years and years into the future. Marches, remixes, chants, alma maters are composed, even skits are sometimes performed. One camp has a “Silent Dinner” where campers are challenged not to talk or laugh as staff run around being silly trying to entertain campers who are trying to not laugh out loud so they don’t lose points. Rope Burn is popular as well, with campers competing to burn an elevated rope, with a fire they have built, before the other team burns theirs.

One of the most special parts of these few days, however, is the camaraderie among campers of all ages: all of a sudden, an 8-year-old camper on the Blue Team is taken under the wing of a 15-year-old from the Blue Team, and a new friendship forms. Two campers who have lived in the same bunk all summer form a new bond because they are on the same team. Friendships deepen and become enhanced by a few days of good-natured competition. After a few days, and all the closing activities, a winner is announced. Cheers for the winners (and bragging rights too!), possibly some tears for the losers, but by the time dawn breaks the next morning, everyone is once again happy to wake up to a new day at their Maine camp.