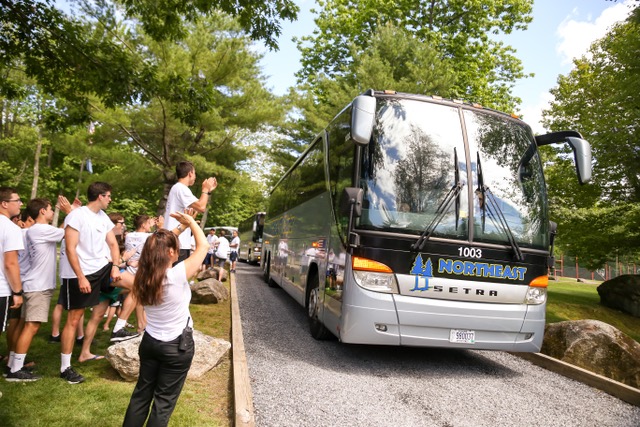 There is no amount of preparation that can truly prepare you for the first day of camp in Maine. The energy that accompanies the arrival of campers is unparalleled – in a matter of hours, the coach buses, vans, and cars transform camp from a pre-camp staff training ground into the hive of summer activity that it will remain until August. Amidst the reunions and reverie, and the literal tears of joy being shed by campers who cannot contain their happiness, there is nothing quite like the first day of camp.

For all campers (and some counselors), Opening Day begins well before campers set foot in Maine. At many Maine Camps, the majority campers will take the bus (or chaperoned camp flights), and their summer at camp will begin as soon as they join their fellow campers for the journey to camp. Oftentimes camps will assign seats on the bus, especially for new campers and younger campers, to ensure that those who will have the greatest transition will have a chance to make a friend their age before they arrive at camp. Some campers may not be able to take the predetermined camp transit, however camps will do their best to accommodate any particularly difficult travel needs – for example, this year myself and a fellow counselor made the drive from Maine to Boston and back to pick up a camper who had arrived on an afternoon flight. While it may have been a long day of travel, it’s vital to make sure that all campers are able to safely arrive at camp.

One staple of Opening Day at almost every Maine camp are the health checks that all campers undergo immediately upon arrival. Campers will have their temperatures checked, and their ears and throats examined to ensure a clean bill of health. In the close confines of camp, illnesses can rapidly spread and it’s vital to ensure that any campers with health issues are attended to in the health center. Camps will also conduct lice checks immediately, so that any campers with lice can be treated before they share their itches with their bunkmates or counselors. Once these preliminary health checks are taken care of it’s time for the fun to begin!

Revelations and Reunions, Meeting and Greeting

At many Maine Camps, campers will be told what bunk they are in when they arrive at camp. When campers arrive, they are always thrilled to find out which of their friends they will be living with, and who their counselors will be at their summer home.

Of course, one of the highlights of the first day of camp for any returning camper is the chance to finally say hello to their lifelong summer friends. The screams of joy as campers reunite can be heard as soon as campers step off the bus, and it really is a special sight to see the embrace of campers who have been waiting ten months to finally be together again. As a returning staff member, this year I was able to experience what it’s like to be a part of that sense of reunion, and I was honestly surprised by how excited I was to dish out hello’s and high fives to the campers I had grown close to over the summer.

At the same time, not every camper will be returning to a built in set of friends – many campers will be attending camp for the first time, and the idea of being in a brand new place with brand new people can absolutely be daunting. During pre-camp, counselors are trained in a variety of icebreaker games so they can get to know their cabinmates and counselors. All staff members also wear nametags on the first day, which makes it a little bit easier for new campers to bridge the gap and approach the people who will be looking after them over the summer. Hopefully, everyone will have made at least a few friends by the end of Opening Day.

Because a first day of camp is an emotionally trying day for many campers – both new and returning – camps intentionally schedule very active activities for this day so that kids can focus on having fun, and won’t have a ton of downtime to think about their families at home. As the Landsports Director, I ran a series of activities for younger campers including “Steal the Bacon,” “Captain’s Cabin,” and “Blob Tag”. If you are not familiar with these games, they all have one thing in common – they require a lot of running. A little homesickness is oftentimes inevitable, but by staying active, kids can keep their focus on the fun they are having, and will also be more tired and more easily able to fall asleep when nighttime rolls around.

Each camp has their own approach to Opening Day, but almost every camp will have some traditions that provide a semblance of continuity for campers upon their arrival. These traditions may include inaugural cheers in the dining hall, traditional first meals (it’s pizza at my camp), or ceremonial Opening Day campfires. In each case, the point is to create the feeling that camp has finally begun, and to solidify the transition to camp life.

The first day of camp is nothing if not exhausting – both emotionally and physically. Between a full day of travel and a series of active games, and the emotional exhaustion of saying goodbye to family and hello to camp friends, many campers will end the day absolutely run down. Camps will oftentimes have an early night the first night so that campers have a chance to recharge and prepare for the first full day of camp. And when campers wake up in the morning, they will do so at camp – summer has finally begun!