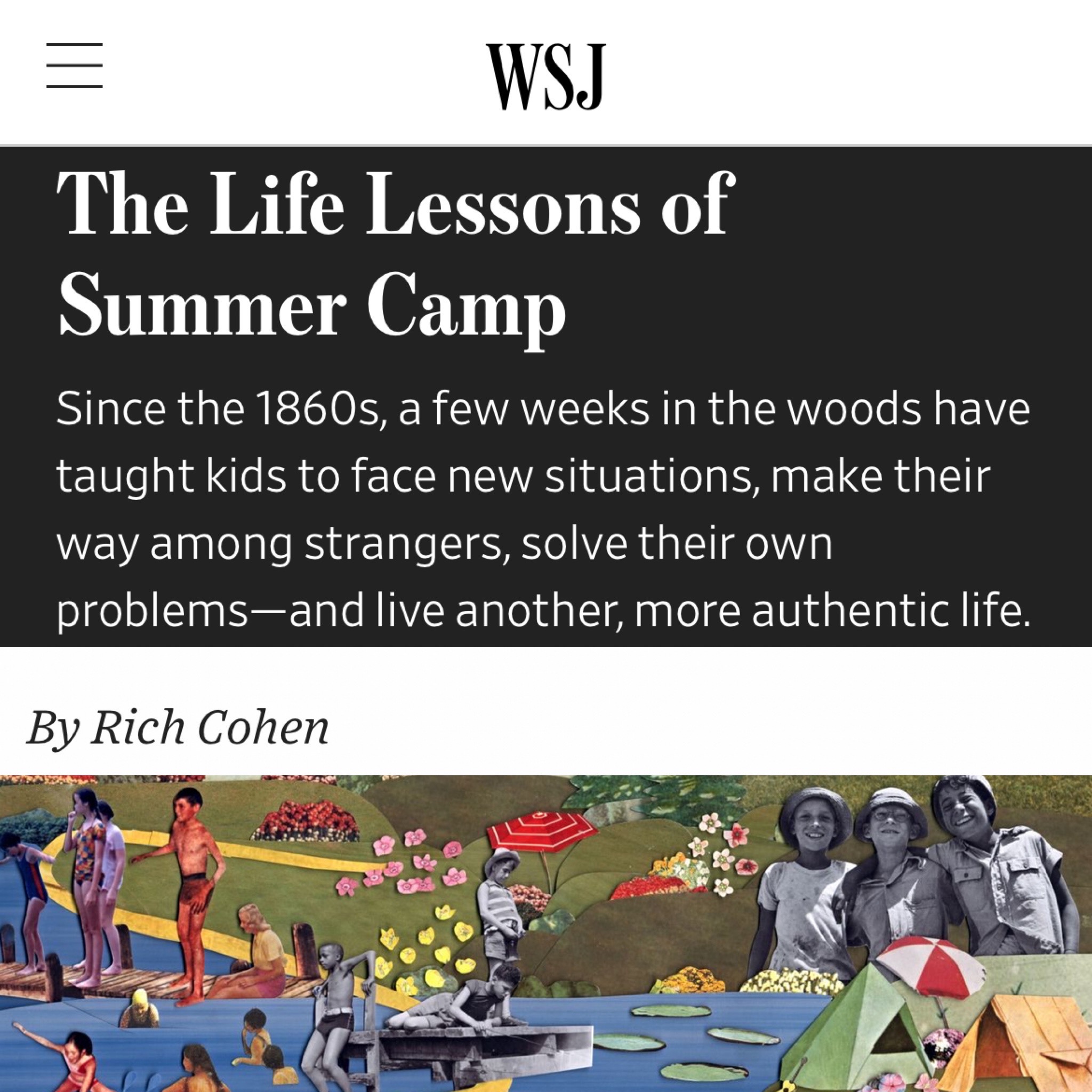 “Everything important I know, I learned at camp,” according to Rich Cohen, author of an article published in The Wall Street Journal this week about attending overnight summer camp.  It’s a worthy read; he hits on both the obvious and the subtle ways in which campers’ lives are enriched by the camping experience itself.  Further, he provides an interesting history of American summer camps, and finishes with his perspective of camp as a parent of a camper.

Cohen does an artful job of getting to the core of what camp is really about: experiences and knowledge that are unattainable anywhere other than summer camp. He talks about classic sports and skills that he learned: kayaking, making a bed, and marking a trail. (He also shares the useful skills he picked up like how to barter and bluff, and form an alliance.) He cried at the banquet each summer and he earned a nickname by which only his fellow campers know to call him. He learned to compete, to have pride in his camp, and he learned to survive without his parents.

The article includes an interesting history of how the summer camp movement evolved in the United States, and the way in which it parallels American history itself. He even mentions Camp Keewaydin of Maine, founded in 1893 and one of the first summer camps. Historically, there have been camps for a plethora of religions, races and socioeconomic groups, and varied reasons why camps developed for different groups in different locations. In this respect, Cohen drives the point home that there is a camp is for everyone, and has been, for well over a century.

As has been mentioned before in this blog and elsewhere, one of the greatest benefits of overnight summer camp is the opportunity to grow up for just a few weeks or months without having your parents to lean on. At one point in his article, Cohen references the forward of Camp Keewaydin alum Michael Eisner’s book about camp, which states that the mission of camp is “to wean you from your parents amid a kingdom of kids.” Cohen succinctly highlights the unique feelings of being at camp: “the sense of remoteness and freedom, of dwelling in a land beyond the jurisdiction of helicoptering parents, of being left to settle your own feuds, fight your own fights, solve your own problems.”

Both Cohen and Eisner attended camp years before the invention of iPhones, personal electronics and the like. There was no unplugging back then, no challenge of weaning kids off of FaceTime or texting during the summer months. In 2022, some kids are as attached to their phones as they are to their parents. The lines of communication are constantly open, an endless distraction from living in the present. Camp provides a welcome respite from such a world.

The end of the article highlights the changes of camping today compared to years ago: online photos, improved food, session options, and emails. We all know that some parents and kids welcome and applaud these changes, some bemoan the introduction of technology and modernization into camps. Cohen sums it all up expertly in his final paragraph: “[Y]et, in important ways, camp remains the same. It’s still not home. It’s still no parents. It’s still new people. It’s still the woods. It’s still the world. It’s still 15 bodies in a bunk, stiff beds, wool blankets, no TV, rank odor, fungus, bugs, pranks, bed-wetters, summer friends, dark nights and star-filled skies. It’s still your best chance of getting them away from the phones and the screens. It’s still paradisiacal and green. And it’s still what we need – now more than ever.”

In the interest of full disclosure, the author attended summer camp in the Midwest, and not Maine. Although Maine Camps are unique in their own right, there are obviously many similarities among the benefits from all camps; enough that this article, since its recent publication, has resonated among people across the country who have had a wide variety of camping experiences.

Camp, in so many ways and despite any changes, will always be the same. For those people lucky enough to have gone, camp is the first stop on the road to independence.

The article can be read in its entirety (available to WSJ subscribers): https://www.wsj.com/articles/the-life-lessons-of-summer-camp-11657292830