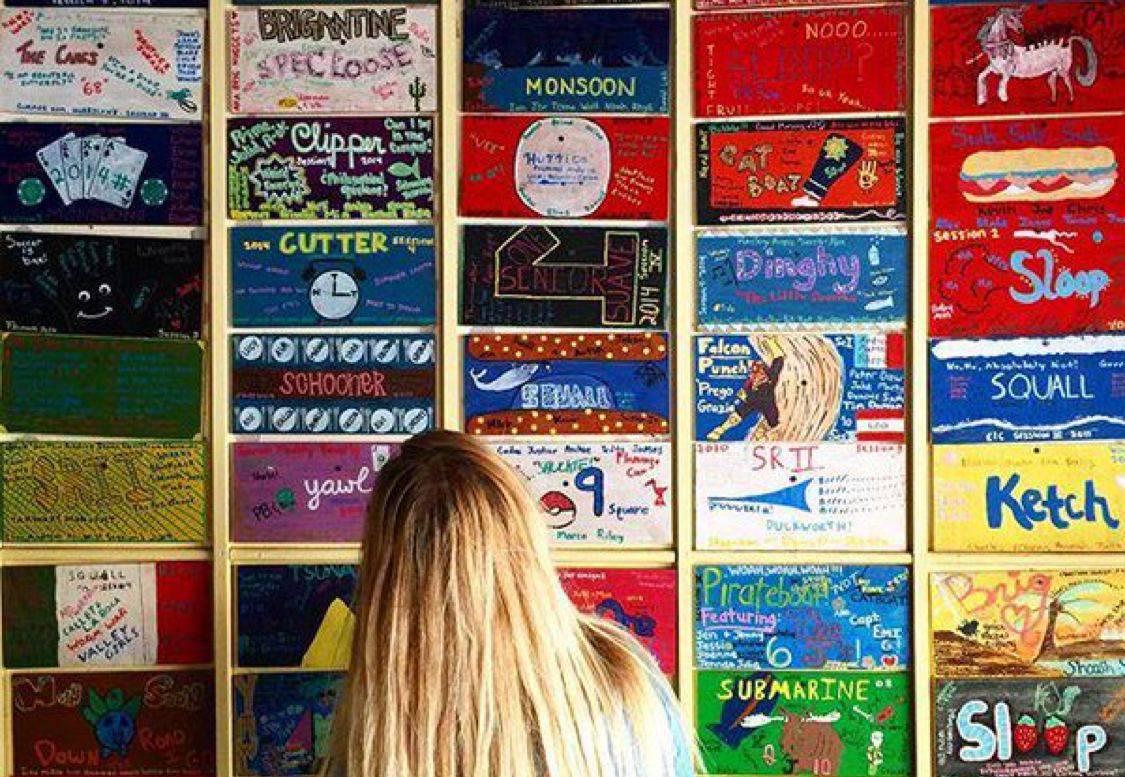 I am an alumnae of a Maine Camp Experience (MCE) Camp. My twin daughters now attend the same MCE camp that I did when I was a girl their age. They sleep in the same bunks that I did, eat in the same dining hall and participate in many of the same activities that I did as a girl.  It gets me so excited to know that they are having so much fun, growing independence and building self-reliance.  I know that at camp they, like I once did, are learning to be their best selves!

Truth be told, it is difficult as an alumnae parent not to want to re-live every experience with them.  When they tell me a story, I want to share my own past memories of each activity.  And when describing their bunks, I want to point out that I lived in the same bunk that they are now living in.   Fortunately, I don’t have to.  You see I, and the many alumnae before and after me, have left a piece of ourselves at camp.  Whether it’s a bunk plaque, a Call Board or a picture from the drama productions I participated in years ago, there is still a “living piece of me” at my camp.

One of the most unique aspects of attending camp in Maine is being woven into the fabric of tradition at your camp. MCE Camps are rich in history.  Many are 50 to 100+ years old.  The alumnae of these camps have shaped the history, built the culture and in many camps, influenced the architecture and facilities that our kids derive so much from today.   In some MCE camps the alumnae history is subtle – stories from the past, songs that have been handed down or trophies that have been won.  At other MCE Camps there are Color War banners and plaques from years past that hang in key camp buildings.  And in many other MCE camps the alumnae history is on clear display.

The MCE camp I attended has Call Boards – which are plaques listing all of the campers, counselors, staff, pets, and other camp attendees – and Camp Pictures from every year the camp has existed hanging throughout their dining hall.  Another MCE boys camp has a building called, “Alumnae Hall” which houses it’s “Hall of Fame” and lists all of its “Five Year Campers.” Another MCE camp has large installation pieces, the results of prior years’ Color War competitions, scattered throughout its landscape.  Other camps boast alumnae brick walks, drama production cast pictures with Playbills on display in playhouses, oars and water skis mounted from gymnasiums with names of past campers who have achieved key goals and bunk plaques of every size and color that tell a tale on the walls of camper cabins.

When alumnae visit MCE camps they reminisce about the waterfront, the lodge but most can’t leave without a glimpse of the “living memory” that they left behind – the proof that they were once a part of it all.

This summer my girls told me the story of their search to find one of “the pieces of myself that I had left behind.”  Together with their bunk mates, they scoured all of the Call Boards in the Dining Hall until they had found my maiden name.  Excitedly, they all climbed up on a dining table to identify me as a camper in the adjoining picture.  “The good news,” my daughter told me, “was that we found you and you looked exactly like I do now!  The bad news is that we broke the table.” Apparently, eight excited campers standing on one side of the table was a bit much and the table collapsed.  Fortunately, no one was hurt and the picture from 1980 survived to live another day.

That search inspired my girls to track down all of my former Bunk Plaques.  A bunk plaque is an end of camp tradition at many MCE Camps.  The campers work together to make a plaque with a theme that represents their group and then add inside jokes, personal memories and nicknames.  The plaque is then hung in the campers’ bunks as a memory of their time there.  Upon finding some of mine, they told me that my plaques looked “silly and not as cool” as the one’s their bunk did.

I can’t wait for the next 30 years when my kids’ kids return to search out their parents “living piece of themselves”!