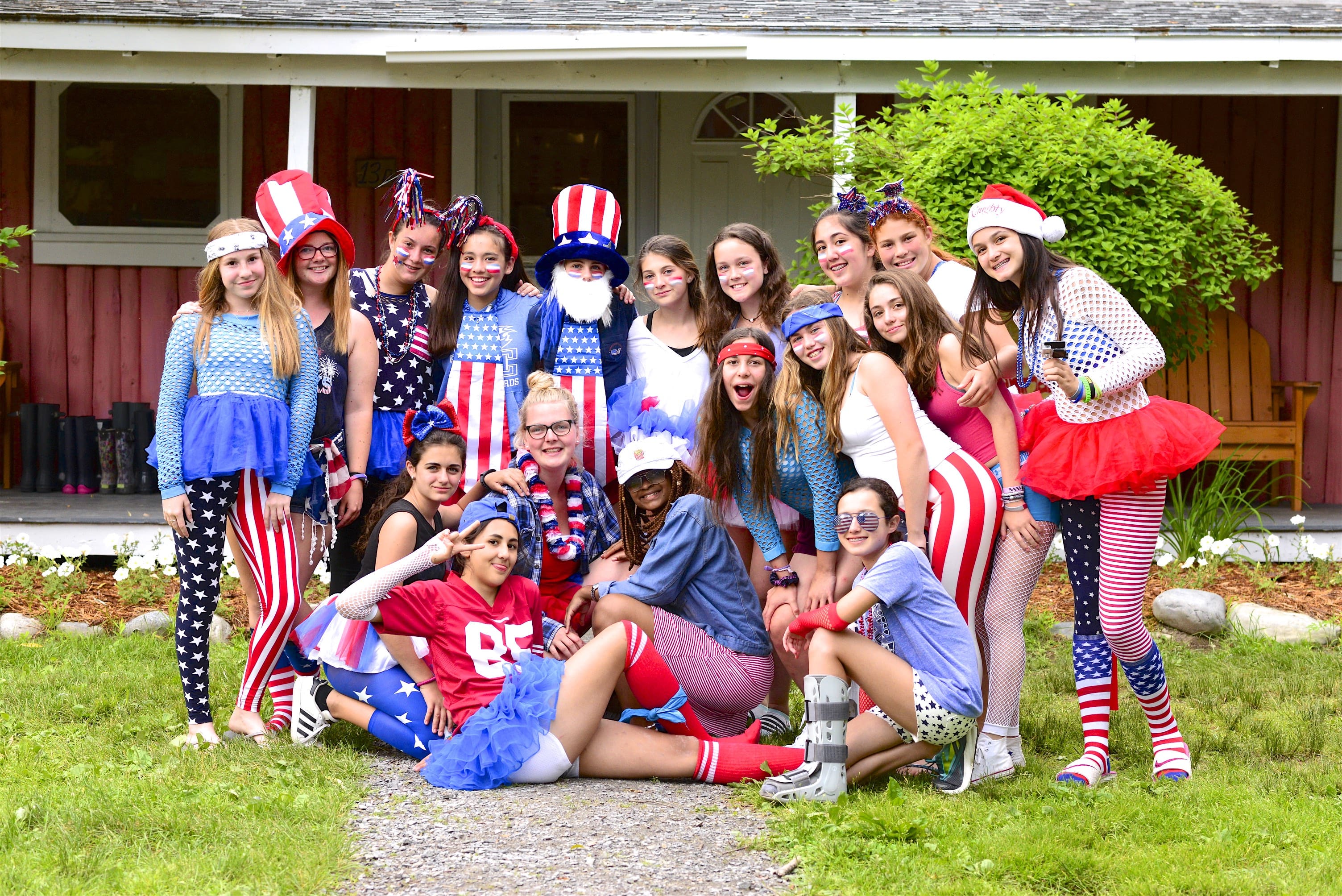 One constant among Maine Camps is that at least one summer session will generally include an incredible national holiday – the 4th of July! There’s nothing quite like celebrating American Independence Day at camp – Maine Camp Experience (MCE) make the most of this day and the spirit of patriotism permeates the entirety of this truly unique holiday. From what we wear, to what we do, and who we do it with – there really is nothing like a 4th of July spent in Maine!

Wearing costumes and dressing up is a core part of camp culture, and the Fourth of July is no exception. Campers and counselors alike will bring red, white, and blue, or star-spangled clothing so that they put their patriotism on display. Some will keep it simple with a red shirt and blue shorts (perhaps with a white bandana thrown in), while others will have a more eclectic take on the holiday – I personally know of one counselor who has ordered an American-flag themed T-Rex suit. Last year, I personally ordered a pair of American flag sunglasses, a red, white and blue tank top, and a stars and stripes bucket hat so that I could wear my usual attire with a patriotic flair. In any case, the 4th of July is a great opportunity to dress up in red, white, and blue!

At the MCE camp I work at, the 4th of July begins with a lazy day for most campers and some counselors – and it is a great opportunity to catch up on some much-needed rest. While the rest of the camp is lounging, our oldest campers and more ambitious counselors will participate in the “Four on the Fourth,” a four-mile run through a nearby town that several camps will participate in. Last year, we even came home with a trophy for the best camper times in the race!

After this lazy (or not) morning, the whole camp will assemble for a ceremonial flag raising ceremony, which is a tradition at many MCE camps. The whole camp comes together to sing the pledge of allegiance as the flag is raised. The raising of the flag is a privilege undertaken by the oldest campers, and is something campers look forward to as they grow up at camp.

At many MCE camps, there is special or unique programming scheduled for throughout the 4th. At the camp I work at, the flag raising is followed by a softball game played by the oldest girls, which marks the official start to Color War “Team Games”. We will then have some type of unique activity throughout the rest of the afternoon – this year we’ll be holding a zany “water Olympics,” complete with floatie relays, games in the lake’s “crib,” and more – but don’t tell the kids, it’s a surprise! Another year, we split campers into groups of about ten, and they embarked on a camp-wide scavenger hunt with a variety of tasks and clues that ultimately lead each group to an ice cream truck at day’s end. No matter what the specific programming may be, you can be assured that camps will pull out all the stops on Independence Day!

MCE camps oftentimes have incredible geographic diversity among their campers and counselors, which can make for a very exciting and unique Fourth of July. As campers and counselors come from all over the world, from the UK and Ireland to South Africa, Australia, New Zealand, from Spain to Italy and China to Mexico, camp provides a unique opportunity to celebrate a truly American holiday with international friends. However, though these campers or staff members come from places that do not traditionally celebrate American Independence Day, they are absolutely included in the festivities. They will dress in red, white, and blue just like the Americans, and enthusiastically partake in the activities and spirit of the camp community.

Of course, one of the most longstanding American traditions on the 4th of July is fireworks, and MCE camps are sure to build this into their traditions. At many Maine camps, the Independence Day celebrations will culminate with a fireworks display –campers and counselors watch incredible pyrotechnic shows over their beautiful Maine lakes. Sometimes these firework shows will be orchestrated by the camps themselves, and other times the campers will get to enjoy a display that is put together by the local town and community. In any case, while lying on the lawn, watching the fireworks fill the sky over the lake after a fun-filled day of special events, it becomes obvious: it’s good to be in America on the Fourth of July, and even better to be at camp in Maine!