Visitors should be warned that a Maine meal, wherever and however you have it, may be habit-forming. Maine chefs are hot—not just popular but drawing heavy-duty national acclaim. The state's seafood is sought by fish and lobster lovers around the globe. Its farmers markets are booming, with more markets, more farmers per market and a wider range of produce than ever before. 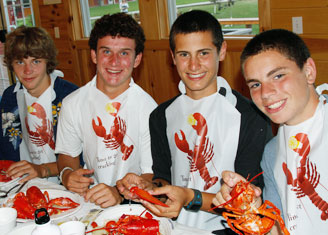 There is no question that lobsters highlight the menus in many Maine restaurants and these tasty crustaceans are a delicacy that should not be missed, but Maine offers fine dining options throughout the state. Seafood restaurants dot the coastline and provide food so fresh, it probably came from the ocean just a few hours earlier. Fine dining restaurants, country inns and resorts serve up elegant culinary delights for the sophisticated palate, while small town restaurants and sporting camps pile your plate high with delicious home-cooked meals.

A change has taken place in the Maine cuisine and the excitement is palpable. At many Maine restaurants and at farms, fairs and festivals where foodies gather around the state, you can feel the buzz. As the national food press explores the territory and sends out enthusiastic reports, more people are coming to Maine mainly to eat. They're finding a culinary landscape that makes the state a delicious destination for people with a range of economic levels and culinary predilections. Whether you prefer to eat out or buy the ingredients and cook them up yourself, Maine has something exciting to offer, something distinctively its own.

When the Food Network for the first time this year announced its candidates for the U.S. city that is “The Most Delicious Destination,” Portland was among its top five picks. Asked in The New York Times Magazine about cities where the culinary scene is hot, New York City restaurateur Danny Meyer described Portland as “obsessed with good food.”

When nominees for the James Beard Award for Best Chef in the Northeast were announced in spring 2010, Maine chefs Mark Gaier and Clark Frasier of Arrows in Ogunquit were on the list…again. Nominated for this most prestigious award six times, this was the year they took home top honors. Mark and Clark now join the ranks of the many other chefs in Maine who have earned James Beard Awards, nominations and other accolades for culinary excellence.

discover Things To Do in Maine

Got a question? Want help?
Call, email, or chat with me, the Maine Campcierge®

Content on this page is courtesy of
Maine Office of Tourism.
discover Things To Do in Maine